8 People You 100% Could Have Hooked Up With Over Break 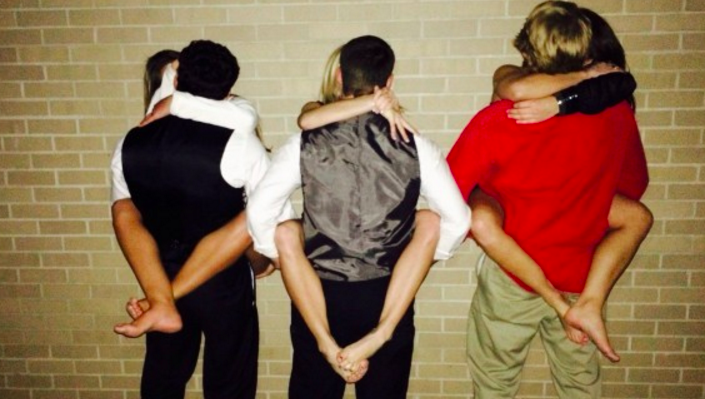 Going home for the holidays leads to a lot of great things. A few weeks of your parents picking up the check at dinner, plenty of downtime, and enough cookies to bump you up a dress size (or two), had all of the makings of a perfect vacation. The only thing missing? Someone to keep you warm, cozy, and satisfied. While some of us managed to stay on Santa’s naughty list all break, for the rest of us, things were a little tamer. If you missed out on a chance to get more than just your stockings filled, take notes. Here are the people you could have easily gotten with over break.

Sure, the holidays are over, but with summer right around the corner, plan now or face three very dry, very boring months come May.

Assuming you didn’t end on horrible terms (and the only situation that it would be considered “horrible” is if one of you killed the other, so most likely you’re good), the odds of getting your old ex to get down and dirty with you are pretty simple. You’ve seen each other naked, you know what the other person likes, and you know how to push their buttons in a way that will get them to say “yes” to just about anything.

How it could have happened: All you had to do was text them. Subtle or to the point, it truly doesn’t matter. Assuming you still look halfway decent and bring some vodka, you could have gotten it in, easy enough. You just had to be mentally prepared for the mediocre sex and the annoying jokes he made in bed that made you dump him in the first place. Ah, well. Desperate times.

Maybe it was the hot guy on the soccer team who never gave you a second glace. Maybe it was the lab partner you always let copy your notes in hopes that they would love you. Whatever the situation, you had a crush but for some reason, nothing ever became of it. Instead of just keeping them on your “People I Should Have Hooked Up With” list, you had the perfect opportunity to make shit happen.

How it could have happened: The magic in the air. The holiday vibes. The alcohol. All it would have taken was a few shots of Fireball, a nostalgic house party, and enough shameless flirting to pump up anyone’s needy ego.

The Person Who Was Obsessed With You In High School

You know, the person who always let you copy their lab notes? The guy who always teased you, but you were too busy dating the asshole who cheated on you with the entire Honor Choir to give him any attention? They were just a little too nerdy for you to get with them, but now? You realize that they’d probably be a total catch. Thanks to the fact that they joined a fraternity, learned what a gym was, and threw out their cargos, the ugly duckling finally turned into a somewhat acceptable sexual partner.

How it could have happened: Assuming they didn’t know they were hot yet, all you’d need to do is give them the slightest bit of attention. Seriously, that’s it. Shoot them a glance at a party. Like their lame Instagram post. Hell, take it old school and poke them on Facebook. That’s all it would have taken.

That on-again off-again person who you’d make out with during study hall but avoid eye contact with at lunch? The guy you’d pretend to hate in front of your friends, but you’d stay up all night talking to on the phone or sneaking out of your house and meeting in the dead of night? Yeah, that fella.
How it could have happened: The same way it would always happen. With some stolen alcohol from your parents’ liquor cabinet, a late night text, and that buzzing feeling in your veins that just makes you want to do something ~bad.~

The Guy From Your College Who Lives In Your Hometown

It’s not so much that you’re dying to get with him as it is convenience. You’ve hung out once or twice at school, and he’s attractive enough. Maybe you had a DFMO or maybe there’s just been some harmless flirting over warm beers at tailgate. Whichever the situation, you were both in the same place, you were both bored out of your minds, and you both wanted to make sure that your genitals didn’t form cobwebs over break.

How it could have happened: While this one might have taken a little more work, it’s one of the few options with actual long-term potential. Sure, you have to lay the bait for a bit longer, but it could actually have been worth it. If you started hitting him up a few weeks before break, casually bumped into him at the same party, and kept a string of Snapchats up with him when you get home until one night when you were “just sooooo drunk” and sent him something a little more risque, you would have been set. It wouldn’t have taken long before he realized that you were looking for a little more than virtual communication with this convenient person and you would have have been engaged by graduation. Your loss.

The Washed Up High School Hottie

How it could have happened: All you had to do was ask him about his glory days and he would have given you a long-winded story and a few solid minutes of intercourse. Such a shame you missed out.

We get it, you’re in a relationship. What’s more, you’re in a serious enough relationship that you spend the holidays with each others’ family. What’s next? A ring by spring? Still, just because you brought your better half home, it doesn’t mean you scored. If you didn’t get it on in your childhood bed, why did you even go home in the first place?

How it could have happened: This is the reason cars, house parties, and late-night walks still exist. Sure it seems a little ~immature,~ but so is missing out on an orgasm just because you’re under your parents’ roof.

Don’t lie. This one you totally nailed.

How it could have happened: Two AA batteries, a lock on the door, and your favorite dirty book. Ahhh, just like high school. Talk about the perfect homecoming..