This Woman Is Less Single Than You, Is Engaged To Her Chandelier 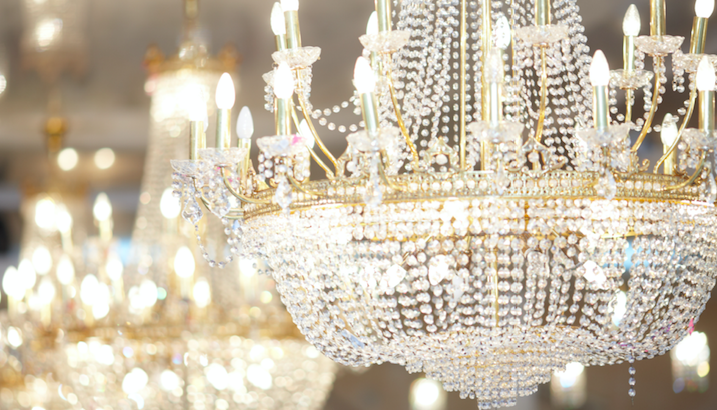 One goal a lot of us have in life, whether we admit it or not, is finding someone to settle down and live happily ever after with. The thing is, even though we thought that shit would be easy growing up and watching fucking Disney movies, in reality, it’s a hell of a lot harder than just making some prolonged eye-contact.

You have to somehow forge a connection with a person, put in your time, make them love you and then, only then, if you manage not to screw it up or show your crazy, you might actually have a shot of locking that SOB down. It’s no wonder there are so many books, movies, and websites dedicated to love because honestly? That shit is hard.

So, it should come as no surprise that some people just say “fuck it” to the whole thing. Whether they figuratively marry their careers or just get a shitton of cats, there are other options for the people who don’t want to buy into the whole “human soulmate” thing.

Those other options, however, just got a little bit stranger.

Enter, 33-year-old Amanda Liberty. She’s an Englishwoman who identifies as Objectum Sexual (OS) which means, of course, that she is attracted to is attracted to inanimate objects. And now, just as engagement season is about to come into full swing, she has some pretty exciting news.

The bitch is getting married. Again. I think.

Woman gets 'engaged' to 28in wide chandelier named Lumiere – but she takes a different one to bed https://t.co/kpsTZrZ4Ur pic.twitter.com/p4SfiW77LN

You see, in 2010, Amanda was in love with the Statue of Liberty. So in love, in fact, that she legally changed her name to Amanda Liberty. That said, the distance was hard on the couple and sadly their relationship suffered. Still, she’s moved on to a brighter, more local love. Meet Lumiere, her fancy ass chandelier.

This woman fell in LOVE with a chandelier 💗 @DailyMailUK https://t.co/9PBtzuEsT5 pic.twitter.com/U7esDIqrAl

Yes, Lumiere is named after the candelabra from “Beauty and the Beast.” Yes, Lumiere is the one who wears a ring. And yes, now everyone is jealous of a fucking chandelier for getting married before all of us. And while Amanda has chosen Lumie to be her wife, she’s still in open relationships with the rest of her 25 chandeliers, because a girl’s got to have options.

As stated before, this isn’t Amanda’s first time being in a serious relationship with an object. Before her passionate love affair with the Statue of Liberty, Amanda was in love with other items, including her first serious OS relationship at the age of 14 with a drum set. And even though this relationship is moving fast (she got Lumiere on ebay last year), she knows there’s something special there.

Now sure, some people might think this is weird or whatever, but I’ve gotta give the girl props. Not only is she going to have a stunning wedding (I mean, hello! All of those chandeliers there?!) but she can make all of the decisions and she’ll have a lifetime of bomb ass lighting. Talk about a win-win-win..