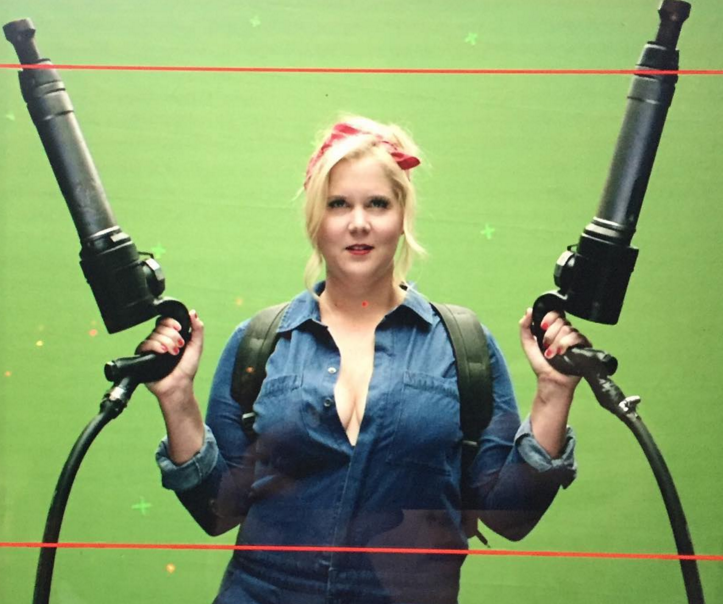 Sexual desires aside, Amy Schumer is bomb. She’s hot, hilarious, and she speaks honestly and openly about who she is. Hell, she posted a nude photograph when a guy called her fat (proving, even though she didn’t need to, that she actually is a size 6) and then again when she rocked her natural body and made girls everywhere feel ~understood~.

Sure, she’s not stick-Hollywood thin or has been injected and altered and reshaped so many time she looks plastic. Her weight, unfortunately, has been a huge topic of conversation since her career when off, as opposed to, you know, her talent? Recently, Glamour Magazine highlighted her in a special “chic at any size” issue.

What a great concept, right? Being chic at any size. I mean, sure. You could just throw these girls in the normal magazine and not act like they’re a charity case, but whatever. I don’t know fashion or runway models or dieting so I don’t care. That’s not the point I want to discuss. What I want to call your attention to is the bottom right corner. Those names listed there. See Amy Schumer? Remember how she’s a size 6? Yeah. So does she. She posted this picture to Instagram calling the magazine out.

I think there's nothing wrong with being plus size. Beautiful healthy women. Plus size is considered size 16 in America. I go between a size 6 and an 8. @glamourmag put me in their plus size only issue without asking or letting me know and it doesn't feel right to me. Young girls seeing my body type thinking that is plus size? What are your thoughts? Mine are not cool glamour not glamourous

In defense of the magazine (which I have never purchased because, hello. I wear tanks and yoga pants every day), it doesn’t say “plus size” on the cover. It is, however, targeted for “women size 12 and up.” So in defense of Amy, the entire freaking internet has marketed it as a special, plus size issue. And Amy? She’s not plus size. And saying that she is could fuck with a lot of impressionable girls’ heads. Worse than that, as she said, there ain’t nothing wrong with being in the category. But don’t call someone something they’re not, and furthermore, don’t do it without their permission.

Just waiting for the magazine to come back with some sort of carefully crafted retort that doesn’t make anyone feel better about themselves. What a week for PR nightmares, huh?.