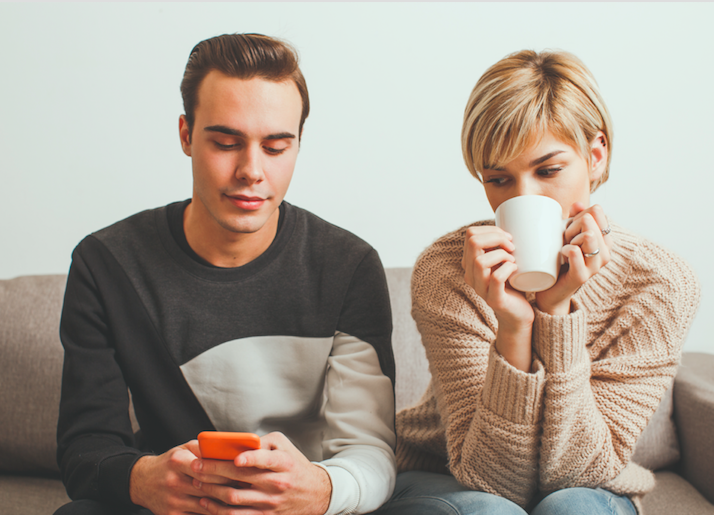 My blood was pumping in my ears as I hesitantly clicked on the picture. She was smiling in the ocean, her blonde hair blowing in the invisible breeze, a carefree laugh frozen on her face. Steady, steady, I told myself, as I scrolled through the comments, trying to gauge if people actually thought she was “OMG *fire emoji* affff” or if they were just saying that to be polite.

I mean, sure. Her tits looked good in her tiny, white bikini. And yeah, her smile, while most likely whitened on Facetune, did look happy and jovial. The wind and the sun were working together to not only make her hair glisten like fucking gold, but it was so perfectly disheveled, she looked like an ad for panty liners.

Fuck. I hated her.

And the best/worst part? I have absolutely no reason to be jealous of this girl. I mean, that’s what it was, wasn’t it? I was jealous. I hated seeing her raking in the Instagram likes. I hated that she could post something so basic and still get flooded with compliments. I hated that I was addicted to scouring her life just to get that rush of adrenaline. Still, that jealousy doesn’t stop with girls I sort of know and am always polite to. It turns out, jealousy is one of my fundamental foundations. I get jealous of everything and everyone. I am, in fact, a jealous ass bitch. Here are just a few people/things I’m jealous of, because if you thought you were psycho, you have absolutely nothing on yours truly.

The Girl I Hate For No Real Reason

For most of us, we just have those people who we can. not. stand. Sometimes it’s hatred, sometimes it’s jealousy. Either way, we enjoy spending time looking at their profiles just to feel that familiar surge of anger. There’s a particular rush I get from seeing the girl I hate hit 400 likes on a picture that does NOT deserve 400 likes that really keeps me going. Is it rational? No. Is it healthy? Hell no. Do I plan to stop anytime soon? Again, that would be a no.

When Other People Have Fun Without Me

Whether or not I was invited doesn’t matter. Hell, it doesn’t even matter if I was in town, sick, or shattered my leg in a freak birthday accident. If I can’t/don’t want to do something, I just assume everyone else will sit at home and play with their dicks. I don’t expect them to actually go out and *gasp* have fun. And if they dare do it? I’ll 1000% withhold my likes and be salty to them the next time we hang out. That’s just how it goes, folks.

When My Friends Have Other Friends

Yeah, I get it. You went to a different high school/work somewhere else/live in a social apartment complex. The thing is, I sort of expect those people to be second tier friends. I don’t care how long I’ve known said friend. I assume I’m not only their favorite person, but I’ll also be a bridesmaid in their eventual wedding (I would be MOH but let’s be real, she probably has a sister). Don’t shatter this allusion by posting a caption saying someone else is your bestie or bring fucking Stacey to happy hour. Stacey smells like soup and her jokes suck.

When My Friends Have Fun With Their Other Friends Without Me

When My BF Has Fun Without Me

How dare you, sir.

The Fact That My BF’s Ex-Girlfriend Exists

I’m not saying I want her to die. That would be extreme. True, but also extreme. Let’s just say, I’d like her hair to fall out. And I’d like her to get fired from her job. I’d like her to take a vow of silence. I’d like her to gain 75 pounds, none of which goes to her boobs or her butt. Most of all, I’d just sort of like her to stop having a fun, happy, and enjoyable life because honestly? It just really bums me out.

Anytime Anything Good Happens To Anyone Else

And this right here is the reason I’m a horrible person. It’s a quality I hate about myself. A quality I’d like to change. And yet, it’s so fundamentally a part of who I am as a bitter person that I don’t know if I’ll ever be able to let it go. Someone got their dream job? Fuck ’em. Someone got engaged? Fuck ’em. Someone met a celebrity? Fuck ’em. Someone got engaged to a celebrity? Double fuck ’em. It doesn’t even matter if it’s something I want. If anyone else succeeds in anything in life, you can bet money that I’m sitting at home, cursing them out, and waiting for the day that it all gets taken away from them. But, you know. In a fun, supportive way, of course!

So, if you ever feel bad about being jealous, don’t worry! You’re not alone! Just shoot me a DM and we can hate them together..